Past and Future Events

Trish Andersen
As an interdisciplinary artist born and raised in Dalton, Georgia “The Carpet Capital of the World”, Trish Andersen’s initial attraction to the process of tufting was a means to reconnect with and explore her roots. Years after attending the Savannah College of Art and Design and moving on to live and work in Brooklyn, New York, she began using the medium as an examination of the notion that a thing or a way of being can run in our blood; that perhaps by observing the characteristics of personal origin and establishing commonality and community around those that reverberate in the present, one may be able to begin unearthing the elusive authentic self.

Enter the drips. Combining fibers gathered from field, sheep and those developed on a factory floor, Andersen proves that there is always room for both the vibrant and the muted, the sleek and the wild, cut and looped, soft and cumulus, the dense and the coarse; the unexpected and varied tactile quality of her pieces allow the eyes to open to an emotional one. Her work speaks to the truth that whether they are temporal, cultural, geographical, or interpersonal, boundaries inevitably bleed, and the results are often quite stunning. 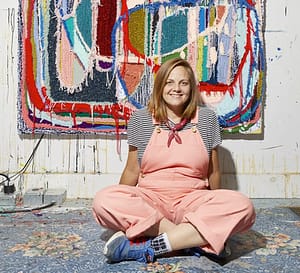 “When I turned eighteen years old, my grandfather told me about a tree on his property where African American men had been lynched by their neckties on their way to

“When I turned eighteen years old, my grandfather told me about a tree on his property where African American men had been lynched by their neckties on their way to vote.  The experience left a profound impression. I am personally tethered to this inescapable memory.”

Where do we go from here? features new artwork, continuing the artist’s exploration into themes of Gerrymandering and voting rights.

Kevin Cole received his B.S. from the University of Arkansas at Pine Bluff, an M.A. in Art Education from the University of Illinois at Urbana, and an M.F.A. from Northern Illinois University where he was a Rhoden Smith Scholar. Within the last 32 years, he has received 27 grants and fellowships, 66 awards in art, 51 teaching awards and his artwork has been featured in more than 490 exhibitions throughout the United States and abroad. Some of his more recent awards include the 2020 Governor’s Award for the Arts and Humanities in the State of Georgia and the Art Aspiration Award by the National Society Incorporation for his dedication to students’ achievements. Additionally, Cole’s artwork is included in more than 4000 public, private, and corporate collections both nationally and internationally.

Kevin Cole has also created more than 45 public artworks, including the Coca-Cola Centennial Olympic Mural for the 1996 Olympic Games. His artwork has been featured in more than 125 publications, including The Guardian Magazine in Paris, France; Scholastic Art (with Dale Chihuly); The Washington Post; Sculpture Magazine; The Union Tribune in San Diego, CA; The Atlanta Journal Constitution, Atlanta; and most recently Forbes Magazine.