Ding’s first exhibition with the gallery in New York having shown works as part of the group exhibition “Lunarian” at Denny Gallery in Hong Kong in 2022.

Ding’s first exhibition with the gallery in New York having shown works as part of the group exhibition “Lunarian” at Denny Gallery in Hong Kong in 2022.

As an avid student of art history, Ding is interested in art objects which challenge beliefs fed through the traditional canon of art history. With his own painting Ding investigates the interstice within beauty and the sublime, looking to figuratively and sometimes literally draw back the curtain to reveal something hidden, however awkward or inadvertent. His investigation into the sublime, an enigmatic element of work and often hard to articulate, has led him to carefully tread the path of history in his own painting practice with medium and technique. His use of egg tempera suggests an intentional mechanism to step inside the historical narrative of painting to reveal its unfolding—to uncover its meaning and veracity as artwork and object. Through this medium, light penetrates and reflects through the multiple layers of paint often inciting a comparison to precious stones and jewels. While, as a contemporary artist, he is mindful of current discourse, Ding often looks to late medieval history where painting became a form of transcendent experience for the viewer in both monumental and miniature form. The intimacy demanded by reliquaries of the time have been influential in his practice where the parameters of viewing are often intentionally intimate and confidential.

Ding’s paintings often depict a male character – an archetype, conveying subject, artist and viewer. These human subjects, even when not directly featured in a painting, behave as clues planted by Ding for the viewer to recognize in works that swim with color, shapes and abstraction. He sees them as vessels that hold the complexities of the human condition. The titles of each work share a similar role, offering a textual ground on which the viewer can anchor themselves to in their own viewing experience.

The title of this exhibition, “Private Paintings”, suggests that the work meets the viewer’s gaze with an intended shyness. The word “Private” also alludes to the furtive nature of each piece. Ding’s work directly deals with human fallibility, involving surreptitious desires and emotions that often go unspoken. There is a sense of repetition and mirroring as each aspect of the paintings deal with these considerations of what lies beneath, whether it is hidden psychology, intimacy in viewing experience or translucent layering of paint. Ding proposes that through painting, instead of seeking a singular meaning, the viewer can find contentment or even pleasure in their unknowing and in doing so, they accept the inevitable distance and realize comfort in their longing. 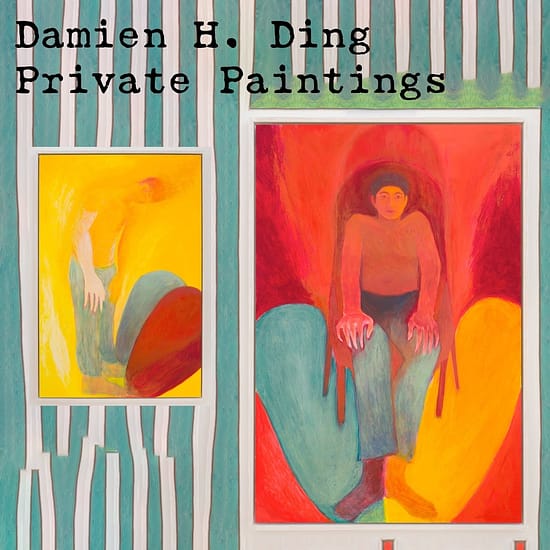