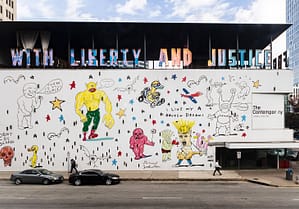 Although best known as a musician, Daniel Johnston (b. Sacramento, California, 1961; d. Waller, Texas, 2019) was also an extraordinarily prolific visual artist. Inspired by comic books, he populated his artwork with a fantastical cast of characters and symbols that he developed throughout his lifetime.

Commissioned as part of the artist’s posthumous retrospective, Daniel Johnston: I Live My Broken Dreams, this mural features images and details taken directly from Johnston’s artwork. Alongside good-hearted monsters, winged eyeballs, and ducks, we see some of Johnston’s most prominent characters: the Beast, a multi-headed creature referencing the Book of Revelation; Jeremiah the Innocent, a symbol of pure innocence anchoring his landmark “Hi, How Are You,” 1993, mural; Vile Corrupt, Jeremiah’s evil, multi-eyeballed nemesis; and Casper, the ghost of Jeremiah and symbol of spiritual redemption.

The Daniel Johnston mural was commissioned by The Contemporary Austin with funds provided by Vans No-Comply.

Special thanks to The Daniel Johnston Trust, Story of an Artist (a project of Electric Lady Studios), Tito’s Handmade Vodka, and Topo Chico.