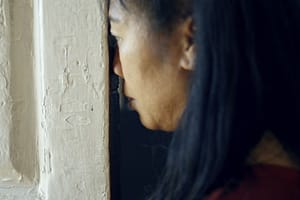 Angiola Gatti (b. 1960 Turin Italy) is an artist who pushes the boundary between painting and drawing suggesting the irrelevance of such distinctions in a contemporary context. Born and raised in the birthplace of Arte Povera Gatti’s use of the everyday ballpoint pen is a nod to the movement’s championing of common accessible tools that she uses in her own style of painting. The ballpoint pen brings her closer to her artwork in a physical way such that as she puts it the “canvas is nearly carved ” by the force with which she presses her pen on her work.

Her mark-making which ranges from tightly controlled to large and gestural is an intuitive investigation of drawing line and form. The ultimate images that she designs are formed by thousands of individual marks and motions. Her larger denser canvases often use up the ink of over 30 to 40 ballpoint pens.