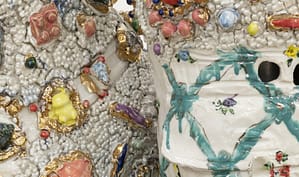 Felipe Mujica (b. Santiago Chile; lives in New York) creates works comprised of installation drawing collapsible sculptures and printmaking. His fabric panels—or curtains as he describes them—operate as both sculptural objects and functional architectural interventions. They often serve as modifiable extensions to the space in which they are displayed; some of them are movable redirecting the viewer’s passage through the exhibition and thus proposing a dynamic composition that is not determined in advance but varies depending on the interaction with the work. The geometric designs on many of these curtains are inspired by themes close to the artist or by the work of other artists belonging to the historical avant-gardes such as Alexander Rodchenko and Paul Klee. Another fundamental aspect of his practice is to open up his art to dialogue with others through a socially engaged production. For example in his project for the 32nd São Paulo Biennial Mujica worked in partnership with Brazilian designers and embroiderers from a local community to employ their personal knowledge and techniques to produce the panels. In Mexico for the XIII Bienal FEMSA Mujica worked in partnership with the Wixárikas artisans from Zacatecas to introduce their cultural knowledge and traditional beading method into his abstract designed panels.

At PAMM Mujica will create new works collaboratively with artisans from the Miccosukee tribe in South Florida. The patchwork designs incorporated in traditional Miccosukee garments and decorations represent abstracted interpretations of the natural world in which the tribes are immersed featuring motifs such as alligators rain river wind and even a man on horse—an iconic symbol of colonial power. By incorporating these abstracted yet traditional designs into this collaborative work Mujica conveys his research on geometric abstraction and its history as well as a sensitivity to a metaphysical exploration of the world. While inside the gallery space viewers will be surrounded with approximately 12-15 curtains bearing symbols and patterns of the outdoor world as seen through the Miccosukee eye. Additional curtains will be placed in outside areas of the museum that shall be visible from the gallery’s window. The exhibition space will also be used as a platform for Miccosukee artisans and community members to engage with our public through programming that will share important aspects of their culture and traditions—providing a space for our audiences to reflect and educate themselves on Miami’s well-respected neighbors of today and some of the earliest inhabitants of Florida.