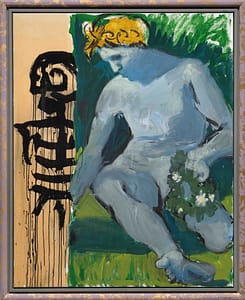 A dithyramb is an ancient rhythmic choral song or chant in honor of the Greek god Dionysus. Used metaphorically by Lüpertz the dithyramb became a device for him to upend the distinctions between abstract and figurative art which allowed him to carve a singular and dynamic place in post-war European painting.
The art historian Richard Shiff elaborates on Lüpertz’s dithyrambic method: “a loop or meandering mark may be all that Lüpertz needs to generate the (abstract) representation of an object…. His bold linear abstraction hovering above generates the representational motif which extends below it bending and curving as the line itself does but now with the sense of a structure in three dimensions rather than in two. It is as if a graphic mark on a planar surface a kind of handwriting had been converted into skywriting in space.” Lüpertz’s synthesis of abstraction and figuration liberates the subject from its conventional meaning and interpretation leaving neither the artist nor the subject accountable to the viewer’s perception.
The exhibition reveals an artist both radical and pioneering in the history of painting. It begins in 1963 with Lüpertz’s seminal Donald Duck paintings and continues into the 1970s as the dithyramb manifests itself as a variety of subjects including a hill roof tile tent or men in suits.
Markus Lüpertz (b. 1941 Liberec Bohemia) is one of the most important and influential artists to emerge from post-war Germany. In recent years major surveys have been presented at the Hirshhorn Museum and the Phillips Collection Washington DC; the Musée d’Art Moderne de la Ville de Paris; Kunst- und Austellungshalle der Bundesrepublik Deutschland Bonn; Haus der Kunst Munich; Gemeentemuseum The Hague; and The Hermitage State Museum St. Petersburg. An exhibition of Lüpertz’s paintings will open on 19 April at Palazzo Loredan in Venice.