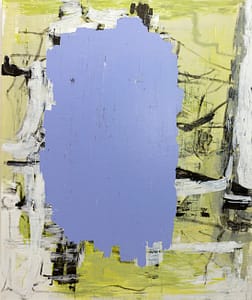 Marcia Wood Gallery is pleased to present Body of Evidence, the second solo exhibition at the gallery by artist Deborah Dancy. The exhibition opens on Saturday, April 30, with a conversation between the artist and curators Karen Comer Lowe and Melissa Messina from 3 to 5 pm, followed by a reception from 7 to 9 pm.

Bringing together multiple recently created bodies of work, Body of Evidence provides a comprehensive survey of Dancy’s explorations in various mediums including painting, sculpture, and photography, which she unites to pursue a trenchant investigation of abstraction, narrative, and the pernicious undercurrents of American history. Alternately lyrical and subversive, Dancy’s works often operate on multiple levels at once, drawing in the viewer with their aesthetic appeal before revealing unexpectedly sharp barbs of critique and confrontation layered underneath.

In the large-scale, abstract oil paintings for which she best known, Dancy is fundamentally concerned with the sensory and formal aspects of fashioning an object-space upon the canvas, implying the presence of some sort of entity rather than that of mere materials. The complex maneuvers Dancy pursues to this end are subtly animated by her distinctive color palette: pastel pinks and blues tempered by smoky grays and blacks, olive greens and golds. These sickly sweet hues seduce the viewer-offering easy suggestions of innocence or virtue-while the darker shades obscure further discernment, confronting the viewer with the dynamics of their own seduction. In this sense, these paintings function as complex visual puzzles that invite the viewer to consider a range of emotional responses to the work, from attraction and intrigue to repulsion and disgust, all while edging toward the sublime.

Often created with acrylic rather than oil paint, Dancy’s works on paper possess a starkly graphic sensibility, implying a speedier, more cavalier process than her large-scale paintings. This relative quickness allows the artist to convey a sense of urgency within these works, which are focused less on internal structure and more on the immediacy of mark-making. More stripped down than her paintings in terms of color and composition, these works on paper indicate Dancy’s training and previous experiences as a printmaker.

A specific series of works on paper included in Body of Evidence is derived from the book Currier & Ives: Printmakers to the American People by Harry T. Peters, first published in 1942. Currier and Ives ran their namesake printmaking firm in New York City from 1835 to 1907, producing archetypal images of the nineteenth century that are still invoked today in the lyrics of Christmas songs and on holiday cards. What is less well known, however, is that the firm’s best-selling series proliferated racist caricatures of African Americans, representing a third of Currier and Ives’s business by 1884. Dancy identified some indication of this disturbing history in the book’s dedication “to the memory of those resolute Americans whose sturdy achievements in building an empire provided inspiration for the prints in the Currier & Ives Gallery.” As a means of disrupting the common rose-colored view of these images and highlighting the imperial impulse they contain, Dancy has applied abstract techniques similar to those in her other works on paper to pages culled from Printmakers to the American People.

Challenges to traditional notions of propriety and class occur repeatedly throughout the exhibition, raising questions about the endurance of such ideologically driven ideals in the forms of nostalgia and kitsch. In the sculptural series Domestic Resistance, for example, Dancy engraves text upon found silver plates and serving trays-“defacing” them, in her own words, tarnishing their supposed purity. The engraved text comes from artist books Dancy previously created: The Practical Speller (1998) and The Conjurer’s Apprentice, or The Legend of Yellow Mary: A Slave Girl’s Tale of Survival by her Wit and Extraordinary Powers, as written by herself (2004). These books adopt the narrative structure and typographic design of nineteenth-century chapbooks published by formerly enslaved African Americans, such as Incidents in the Life of a Slave Girl by Harriet Jacobs (1861) and The Narrative of the Life of Frederick Douglass (1845). Accordingly, the text engraved in silver shows fleeting glimpses of stories-in-progress. One reads, “Brought from the West Indies / a small brown girl / nine years young / stood in a room and / wept.” Because of their reflective surfaces, the silver objects in Domestic Resistance also implicate the viewer’s presence within this violent history-another subtle confrontation.

By contrast, the black objects Dancy has documented in the series of photographs included in Body of Evidence are formally opaque, inscrutable despite their reflective surfaces. Primarily showing vessels, bowls, or figurines, these tintype-inspired photographs display a certain classical quality yet also depict these objects in a form of conceptual portraiture. One photograph shows a coil of hair purchased from a beauty supply store wound tightly in a mound, either a monument to Black womanhood or else-as the artist has pointed out-a sinister trophy. This ambiguity, which pervades the entire exhibition, recalls questions asked by artist and writer Kristina Kay Robinson: “Are you an art lover or a voyeur? An observer or a participant? Do the images please you and, if so, is it joy you feel or the pleasure of consumption?”