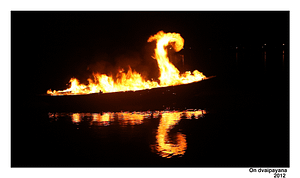 “Inspired by scholar’s rocks naturally occurring stones of various colors and shapes that were famously admired by Chinese scholars I create sculptures of abstract shapes that are shown in between the video projections to represent a micro landscape that allows for the contemplation of our current world.”
– Jia-Jen Lin about Treading on Thin Ice

Treading on Thin Ice contemplates human conditions under progressive catastrophes resulting from social issues and climate change. By employing the concept of landscape as traces of human history as a battleground and an extension of the human body Jia-Jen Lin presents a post-landscape where nature human activities and materiality intersect. By utilizing body imagery as a receiver and reflector the artist explores using our physical bodies as vehicles for reconstructing the events and environments to which we have directly or indirectly been exposed. This project integrates sculptures video projections and sound elements into a large site-specific installation.

In the center of the exhibition is a video projected onto a large tilted platform with sculptures situated in between. With a collection of footage that includes natural and artificial landscapes a generic laboratory scene with actors images on Mars and an explosion during Russia’s invasion in Ukraine the two-channel video creates a crossed-path dialogue exploring our existence and the connections among change adaptation hope human behavior and emotions. Through single-shot improvised acting by two actors we together explore our current moments and the fine line between genuine human reaction and sophisticated acting based on the concepts found in Samuel Beckett’s Happy Days and Waiting for Godot. We reveal subtle everyday reactions and emotions from joy to discomfort awkwardness and even trauma underneath the progressive changes in a larger environment.

Treading on Thin Ice will launch at Locust Projects on April 22 2022 and will continue its expedition with the Arctic Circe in Svalbard Norway in 2022. The exhibition is commissioned by Locust Projects and supported in part by the National Culture and Arts Foundation of Taiwan.

Jia-Jen Lin is a Taiwanese-American artist based in Brooklyn. Her installations mediate the body space human condition and our society. Lin’s practice explores human experiences and how they inhabit our bodies despite different space and time. She creates visual presentations to investigate the human body and its surroundings as a reflection of our psyche. With an interdisciplinary approach Lin’s installations often span several media including sculpture photography video sound text and performance.

Her interest developed around transforming experience through modifying materials and objects into three-dimensional presentations. By employing her body and mind as an experiential interface she looks into the subjects of cultural identities struggles correlated relationships between our physicality and psychology and the resemblance between art making and manufacturing in social content.

Among other places her works have been shown in the Queens Museum in New York Franconia Sculpture Park in Minnesota Incheon Women Artists’ Biennale in South Korea the Watermill Center in New York Hangar in Barcelona gr_und in Berlin and the Rubber Factory in New York. She was selected as artist in residence at the International Studio and Curatorial Program in New York the Bemis Center for Contemporary Arts in Nebraska the Perth Institute of Contemporary Arts in Australia the Künstlerhaus Bethanien in Berlin L’Estruch in Spain and Sculpture Space in New York. Lin has received grants from the Jerome Foundation the Brooklyn Arts Council the Taiwan Ministry of Culture and the National Culture and Arts Foundation in Taiwan. In 2019 Lin curated When Artists Enter the Factories a large-scale exhibition at the Brooklyn Army Terminal. In 2022 she will attend an Autumn Expedition in Svalbard Norway with the The Arctic Circle.