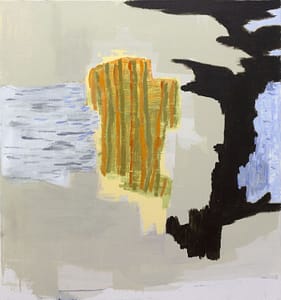 The works in this exhibition expand on the specific visual language and the creative/destructive process that is the hallmark of Dancy’s practice. For Dancy painting is a constant building and tearing down as she paints and then scrapes paint away. A form will as she says “assert itself ” and then require an answer via another shape color or movement which in turn creates yet a new question. And as the conversation of gestures continues the transparency of Dancy’s decision making her embrace of accident and surprise infuses the paintings with a touching vulnerability. Dancy’s mark-making is sometimes dense and insistent and sometimes hesitant and questioning. Arbitrary fields of heavily colored strokes appear out of the gray to disrupt an ambiguous space of oranges and pinks. Interrupted spaces sensuous shapes colliding and the chalky palette all add to the sense of the off-kilter and the amiss. As Dancy says “In these unprecedented times anticipating the unexpected has never been more pressing. The realization of how delicately everything is held together has led me to paintings in which the instability of space and time is keenly felt. The use of color and interrupted shifts of shape and space act to both entice and distract and these unstable spatial tensions speak to our present state of being.”
Deborah Dancy has received numerous significant honors and awards including: a John Simon Guggenheim Foundation Fellowship New England Foundation for the Arts/NEA Individual Artist Grant Nexus Press Artist Book Project Award Visual Studies Artist Book Project Residency Grant The American Antiquarian Society’s William Randolph Hearst Fellowship a YADDO Fellow Women’s Studio Workshop Residency Grant ConnecticutCommission of the Arts Artist Grant as well as a Connecticut Book Award Illustration Nominee. Her work is included in the collections of Museum of Fine Arts Boston The Kemper Museum of Contemporary Art The Birmingham Museum of Art The Baltimore Museum of Art The Montgomery Museum of Art The Spencer Museum of Art The Hunter Museum of Art Vanderbilt University Grinnell College Oberlin College Museum of Art Davidson Art Center and The Detroit Museum of Art among other institutions.