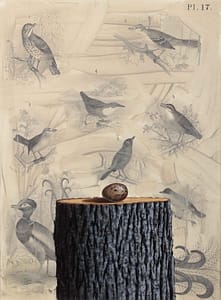 Derfner Judaica Museum The Art Collection at Hebrew Home at Riverdale is pleased to announce it has reopened to the public following a two-year hiatus from in-person exhibitions during the Covid-19 pandemic. An exhibition of works from the collection Aviary Aesthetic: The Symbolism of Birds will be on view from March 8–May 8 2022.

With more than thirty artists and works in diverse media Aviary Aesthetic explores the fascination birds have long held for artists and designers across different cultures and in different eras ranging from late nineteenth-century France to the late twentieth-century United States. Selected from the permanent collection the works on view reflect a variety of stylistic influences from realism to surrealism folk art to scientific illustration.

The artists and makers in the exhibition come from diverse cultural backgrounds. They include Native artists in North America who incorporate birds as symbols of tribal identity and manifestations of the spirit world as well as contemporary artists whose depictions convey mood or draw attention to environmental issues. The exhibition also includes Jewish ritual objects ornamented with cast hand-drawn and embroidered birds.

Featured artists include Will Barnet (b. Beverly Massachusetts 1911–d. New York New York 2012) whose work reflects his admiration for the intimacy achieved by the seventeenth-century painter Vermeer and whose screenprint Introspection (1972) includes a pair of doves a classic symbol of love. Tapovan (2012) a painting by Hunt Slonem (b. Kittery Maine b. 1951) depicts exotic birds as if seen from inside an aviary with plants that help to simulate a natural environment. Both Slonem and Anton van Dalen (b. Amstelveen Netherlands 1938) represented with the sculpture Fantail Pigeon (1983) kept birds at home. Landscape and portrait painter Jon R. Friedman (b. Washington D.C. 1947) best known for his likenesses of such public figures as Bill and Melinda Gates and former New York City Mayor Michael Bloomberg is represented with two of his rich depictions of avian wildlife Peahen (1985–86) and Zoo Duck (1986).

The exhibition also includes a selection of vessels by Native American artists from a diversity of Pueblo communities in the southwest. Among them are Rachel Concho (b. Acoma Pueblo New Mexico 1936) whose pottery features a roadrunner; Loretta Huma (First Mesa Arizona dates unknown) with a jar adorned with a hummingbird; and Nellie Bica (b. Zuni Pueblo New Mexico 1905–d. 1998) represented by a ceramic owl figurine. Owls also appear in works by Gregory Izrailevich (b. Rostov-on-Don Russian SFSR 1924–d. St. Petersburg Russia 1999) Mel Hunter (b. Oak Park Illinois 1927–d. Ferrisburgh Vermont 2004) and Vladimir Gedikyan (b. Moscow Russian SFSR 1928). A pair of hummingbirds are a subject for Dorothy Doughty (b. San Remo Italy 1892–d. Cornwall England United Kingdom 1962) a ceramicist who designed popular bird figurines manufactured in limited editions under her supervision by the Royal Worcester Porcelain Company in England.

Several artists bring attention to environmental issues including Dan Bruggeman (b. Omaha Nebraska 1957) in a mixed media work on paper Science of Birds: The Magpie (1999) and Paul J. Greenfield (American dates unknown) whose ornithological drawings appear in field guides to the birds of Ecuador where he has lived since 1972. Surrealism fantasy and folk traditions inform the real and imagined birds in works by several artists. These include: Garden of Eden from Drawings for the Bible (1960) by Marc Chagall (b. Liozno Russian Empire 1887–d. Saint-Paul-de-Vence France 1985); a lithograph from the series Gates of the Immigrants (1970) by Naftali Bezem (b. Essen Germany 1924–d. Tel Aviv Israel 2018); A Sea Change (1963) by Lars Bo (b. Kolding Denmark 1924–d. Paris France 1999); and Feigele Sing Mir A Liedele (Little Bird Sing Me a Song) from the portfolio Yiddish Folksongs (1962) by artist Anatoli Kaplan (b. Rogachev Russian Empire 1902–d. Leningrad Russian SFSR 1980).

Among the earliest works in the exhibition is an etching by Felix Bracquemond (b. Paris France 1833–d. Sèvres France 1914) a contemporary of the Impressionists titled Ébats de Canards (Ducks Frolicking) (ca. 1881). The Jewish ceremonial objects in the exhibition also date from the late nineteenth and early twentieth centuries including a richly embroidered velvet matzah cover (ca. 1910) originating from a girls’ orphanage in Jerusalem; a beautifully illustrated marriage contract (1891) from Hamadan in western Iran featuring a peacock a symbol of Persian royalty; a silver mezuzah probably from Eastern Europe (19th century); and a picture frame with a stately peacock design from the Bezalel School of Arts and Crafts in Jerusalem (ca. 1920).

All of the works on view reflect the many ways in which the beauty of birds enhances human design whether in paintings sculptures prints drawings or ritual objects and by extension people’s lives. Through these avian creatures humanity seeks to understand and communicate its place within the natural world.

In addition to visiting in person the exhibition may be viewed online at www.derfneronline.org/aviary-aesthetic

Museum hours: Sunday–Thursday 10:30 a.m.–4:30 p.m. Reservations are recommended but not required. Call 718.581.1596 or email art@riverspring.org to schedule a visit for holiday hours and for in-person or virtual group tours. For further information visit our website at RiverSpringLiving.org/art.

Photo ID is required for all visitors to the Hebrew Home campus. In addition all visitors to the Museum ages 5 and older are required to show proof they have received two vaccine doses except for those who have received the one-dose Johnson & Johnson vaccine. Visitors 18 and older are also required to show identification along with their proof of vaccination. Face masks are required for all Museum visitors over the age of 2 even if vaccinated. Proof of vaccination may include:
• CDC Vaccination Card (or photo)
• NYC COVID Safe app
• New York State Excelsior Pass
• NYC Vaccination Record
• An official immunization record from outside NYC or the U.S. Valid ID includes your name accompanied by a photograph OR your date of birth such as:
• Driver’s license
• Government ID card
• IDNYC card
• Passport
• School ID card

About Hebrew Home at Riverdale
As a member of the American Alliance of Museums the Hebrew Home at Riverdale by RiverSpring Living is committed to publicly exhibiting its art collection throughout its 32-acre campus including the Derfner Judaica Museum and a sculpture garden overlooking the Hudson River and Palisades. Derfner Judaica Museum The Art Collection provides educational and cultural programming for residents of the Hebrew Home their families and the general public from throughout New York City its surrounding suburbs and visitors from elsewhere. RiverSpring Living is a nonprofit non-sectarian geriatric organization serving more than 18000 older adults in greater New York through its resources and community service programs.

This exhibition is supported in part by public funds from the New York City Department of Cultural Affairs in partnership with the City Council.