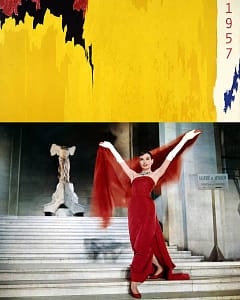 North by Northwest is a tale of mistaken identity with an innocent man (Cary Grant) pursued across the United States by agents of a mysterious organization. The climax of the film comes when Cary Grant and Eva Marie Saint make a run over Mount Rushmore’s monumental presidents’ heads. This escape lasts just over two minutes; but it contributed to making this one of Alfred Hitchcock’s most revered movies for which credit went to everyone except the scenic artists who created the backdrop. It is due to the magic of Hollywood that this life and death action took place on a sound stage with a 90-foot wide painting serving as the historic location.

This exhibition of scenic backdrops made for the movies between 1938 and 1968 is a celebration of a popular art form that had almost been forgotten; and it is now time to acknowledge the authorship of the painting of Mount Rushmore Ben-Hur’s Rome the Von Trapp Family’s Austrian Alps and Gene Kelly’s Paris street scene.

The concept for Art of the Hollywood Backdrop had its genesis with the February 9 2020 broadcast of a CBS Sunday Morning program with Jane Pauley. This program called our attention to the effort to preserve the scenic backdrops that had laid rolled up in the basement of MGM studios. The program introduced us to Lynne Coakley Karen L. Maness and Thomas Walsh. All three have played a major role in preserving this rich body of work created for the Hollywood movie industry and for working with the Boca Raton Museum of Art in organizing this exhibition.

With a multitude of thanks we acknowledge the contribution of these three principal players in realizing Art of the Hollywood Backdrop: Lynne Coakley heads J.C. Backings Corporation which acquired over two thousand backdrops from the MGM storage in the 1970s. In 2012 The Art Directors Guild Archives then under the Guild’s President Thomas A. Walsh launched the Backdrop Recovery Project in partnership with J.C. Backings. The goal was to preserve the backings and make them available to study of the Hollywood scenic painting industry. One of the recipients of this cache of gigantic paintings was the University of Texas at Austin. Enter Karen L. Maness Associate Professor of Practice at the University who saw an opportunity to bring the artifacts of her research into a learning laboratory for this body of work and provide her students a chance to learn from every discipline required to succeed in high realism scenic painting and visualization.

With Thomas Walsh and Karen L. Maness agreeing to be the co-curators of this first major exhibition of the Art of the Hollywood Backdrop the project began. Twenty backdrops including the famous Mount Rushmore are being loaned by Texas Performing Arts Hollywood Backdrop Collection at the University of Texas. The Motion Picture Academy in Los Angeles has loaned two works: the 1952 backdrop for Singin’ in the Rain made famous by Donald O’Connor’s brilliant comic performance of Make ‘Em Laugh; and the tapestry backdrop for Marie Antoinette (1938) which interestingly was reused in North by Northwest (1959) in the auction house scene.

The exhibition celebrates Hollywood’s masters of illusion and perspective who heretofore have received little recognition for their talent or applause for their essential role in making film magic.