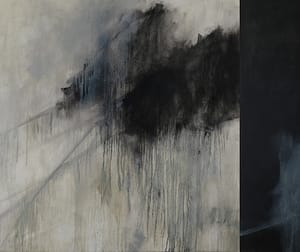 “The beginnings and ends of shadow lie between the light and darkness and may be infinitely diminished and infinitely increased.” – Leonardo Da Vinci

Bill Lowe Gallery announces the opening reception of a new exhibit celebrating internationally acclaimed artist, Steven Seinberg on May 6th, 2022. The reception takes place from 6:00pm until 9:00pm and is open to the public.

In his newest body of work, The Third Book on Light and Shade, American painter Steven Seinberg advances an almost three-decade long exploration of the forces of nature and their cellular connection to our psychic equilibrium. What was once tranquil and undisturbed in earlier iterations, has now become marred with an investigation into the essential qualities and forms – the birth – of light and shade. Seinberg produces starkly split canvases – both a periphery where darkness emerges from light and vice versa – articulating what Leonardo Da Vinci theorized to be primary and derived shadow. “Shadow is diminution of light. Darkness is absence of light.” Da Vinci writes in his Third Book on Light and Shade, from which the exhibition takes its title.

Steven Seinberg regularly uses collage to build his multi-layered works on paper which incorporate oil, graphite, Damar varnish, solvent transfers and sketches which emulate echoes of haiku. As described by critic Peter Frank, “Even more than the paintings, the collages build on negative space – a negative space riven with drips, spots, and other incidents, as ‘empty’ as outer and inner space itself.” This staggering exhibition, which will feature a selection of twenty paintings will also include thirty works on paper in an expansive adjourning gallery.

To accompany the exhibition, the Bill Lowe Gallery has published a 247– page catalog in full color. The book chronicles twelve years of Seinberg’s creative expression up to the current time with a selection of works from The Third Book on Light and Shade. An introductory essay, Second Nature, opens the catalog by the esteemed critical voice of Peter Frank. Peter Solomon Frank is an American art critic, curator, and poet who lives and works in Los Angeles. Frank is known for curating shows at the Solomon R. Guggenheim Museum in New York City. He is a frequent contributor to The Huffington Post, Art in America, ARTnews, and Whitehot Magazine. A curated group of complementary writings by critics Karina Noel Hearn and Robert Morgan from years past highlight the evolution of Seinberg’s practice and conceptual foundations.