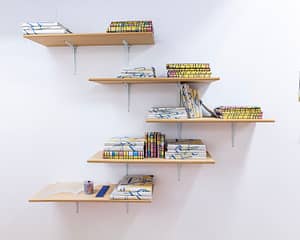 Over the past few years Venezuelan-born photographer Pedro Wazzan has captured formal carefully staged portraits of Bakehouse artists in their studios. The resulting color-saturated images blur the lines between photography and painting.

“I fill the scenes with light and color using speedlites flashes and color gels until I achieve the dramatic look I seek. Then using tethering I begin to shoot while developing the scene on my computer monitor making changes until the image that I had created in my mind emerges.”

Each image meticulously orchestrated illuminates the identity and ingenuity of its subject. Wazzan creates a visual study and survey of the artists comprising the Bakehouse community while also documenting a moment in Miami’s cultural history.

IN THE STUDIO captures an arrested dynamism within the artist’s studio and serves as a window into places oftentimes unknown highlighting the subjects in the context of their practice. Through his use of lighting techniques and production design Wazzan elevates the artist within the intimacy of their workspace.

Wazzan was awarded a 2020 Ellies Creator Award from Oolite Arts for this series.