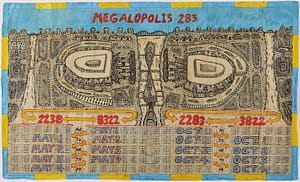 Widener was born in Cincinnati Ohio in 1962 and although he had an outstanding ability with numbers his childhood was marked by awkward social behavior. At eighteen he left rural Kentucky to join the US Air Force. He experienced a terrorist bombing and several other traumatic events while he was in Cold War era NATO West Germany. After being discharged his plan was to become a mechanical engineer but he was led astray by a growing obsession with dates numbers disasters and the practice of automatic memory drawing. He created a personalized counting system that he kept in notebooks hidden in his backpack. For some years he worked odd jobs and slept in shelters secretly filling the notebooks often in libraries. He returned overseas to live working as construction laborer bricklayer and scrap metal collector—often having to stay in parks or abandoned buildings (squats). He focused relentlessly on his notebooks and began his elaborating upon the Megalopolis idea.

In the late 1990s Widener was diagnosed with Asperger’s syndrome (which was surely linked to the subconscious lighting calculating skills that made him a calendar savant from an early age) and enrolled in a Tennessee State vocational rehabilitation program where he was discovered and introduced to the art world.