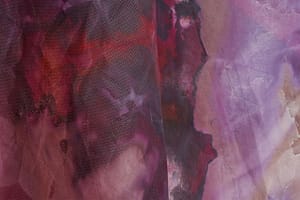 This presentation will span the first and seventh floors of the gallery and feature seven new works from the artist’s Unlight series—including the largest work of this kind to date—in addition to an installation of six new works from Irwin’s series of columnar sculptures which explore new chromatic terrain for the artist.
All of the works on view in this exhibition will be shown publicly for the first time. Those from Irwin’s ongoing Unlight series which will occupy the gallery’s first floor have been created since the artist first debuted this body of work in 2020 at Pace in New York. Extending ever further his engagement with the conditions of human perception and the phenomenological effects of light Irwin’s newest Unlight sculptures comprise constellations of unlit six-foot fluorescent fixtures and tubes installed in vertical rows directly on the gallery walls. Covered in various applications of colored translucent gels and thin strips of electrical tape these works feature sumptuous and rhythmic compositions based on the subtle effects of the existing light in a given space as registered in the reflective surfaces of the glass bulbs and anodized aluminum. The plays between Irwin’s abstract works and the surrounding room result in shifting patterns of shadow and tonality.
Energetic and expansive Irwin’s latest Unlight works challenge viewers to see their environment in new and unexpected ways. Eschewing electrical power in favor of organic interactions Irwin defies the viewer’s expectation of the banal objects—light fixtures and electrical tape—that comprise his sculptures. Neither is used for its ostensible purpose. Yet Irwin does not transform these everyday objects into the materials for his work. Instead he uses them as instruments to conduct his actual materials: “Shadow Reflection Color.” Comprising not only the physical objects on the wall but also these three ephemeral elements of perception Irwin’s Unlight sculptures offer new possibilities for sensorial encounters between individuals and their surroundings.
Installed on the gallery’s seventh floor Irwin’s new suite of columnar sculptures is constructed from sheets of acrylic pigmented in tones of grey and green as well as red which is a color that the artist has never previously explored in this body of work. Irwin has been experimenting with columnar forms made from transparent materials like acrylic since the 1960s and Pace’s presentation offers a survey of the current state of this important valence of his larger practice. Illusionistic layered and multicolored Irwin’s columns evoke the energetic potentiality of light itself capturing the radiance of color almost as a physical entity and gesturing to the subjective nature of experience as well as the shared conditions of human perception.
Irwin who has been exhibiting with Pace since 1966 has maintained his highly innovative and enormously influential practice for more than six decades. A father of the California Light and Space movement the artist has charted new frontiers throughout his career expanding the contours of the canon and continually challenging the limits of what art can be. Having developed an Abstract Expressionist approach to painting in the 1950s Irwin would take up what he has termed a “conditional art” in the 1970s growing his practice of making installation-based works into the broader field of architecture. For more than three decades Irwin has used fluorescent lights in his work and in the last decade he has presented the bulbs and fixtures as the substrate of his sculptural environments. The new works in Pace’s presentation reflect Irwin’s insatiable and ongoing inquiry into the relationships between light space and human perception.