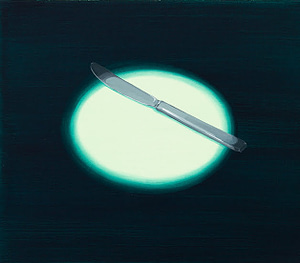 Miguel Abreu Gallery is pleased to announce the opening on Thursday March 17th of Dana Lok’s Part and Parse her first one-person exhibition at the gallery. The show will be held at our 88 Eldridge Street location.

In Part and Parse thirteen works spanning from large vertical canvases to Lok’s well known small-scale paintings come together in a tightly threaded meshwork of intriguing motifs and curious speculations. To encounter her work is to undergo a unique but recurrent experience: every act of looking compels a second more lingering gaze; every thought provoked by an image gives way just as quickly to second guesses. What captivates us in Lok’s paintings is their subtle ability to question the clarity of our perceptions casting doubt that invites wonder rather than suspicion.

Throughout the exhibition visual cues appear both whole and fragmented parceled out like a game of signs or flashcards that if flipped over would reveal an unexpected word—an empty glowing plate with a pristine knife might cipher absence a wink toward similar earlier works that centered a stick of butter. Or in a nearby almost identical work in which the plate has receded out of focus transformed into a blurry edged spotlight beam the same knife appearing now partially in the shadows. Turn this painting over and you might find the word concept. Carved out of space out of the world the contours of a concept are drawn incised and peeled back by the mind. In this way Lok structures her exhibitions in precisely wound webs of logic: an image conjures a name like a clue or secret passageway mapping innumerable paths to travel between artworks.