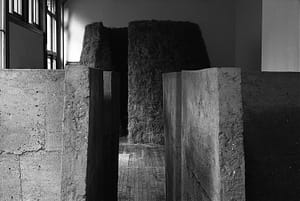 Judd Foundation is pleased to present Two Walls 1984/2022 an exhibition of two works by Meg Webster on the ground floor of 101 Spring Street in New York. For Two Walls 1984/2022 Webster has remade two works Soft Broch (1984/2022) and Long Gates (1984/2022) which comprised her solo exhibition of the same title at 101 Spring Street in 1984.
The two works Soft Broch and Long Gates are made from earthen materials hay and rammed earth respectively. Based on the simple geometry of a square and a circle each work is an enterable form a square in rammed earth and a circle in hay which function as meeting places. The works were first made in 1983 not long after a nuclear war scare with Russia in fall of that year and now made again in 2022 at a time of climate crisis and on-going human-caused mass extinction.1 With these grave challenges in mind the works focus the viewer’s attention on the symbiosis between humans and the natural world. As Webster stated in a 2016 interview “I want you to love more. I want you to care more…It’s about caring for the structure of nature.”2