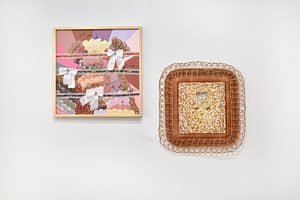 Each artwork is tied to her experimentation with fiberglass window screening a material she began using in the early 1970s and throughout her forty-year career.
Initially trained as a painter in the 1960s Kasten shifted to textiles in her graduate years in the 1970s studying with renowned fiber artists Trude Guermonprez and Magdalena Abakanowicz. Window screening a ubiquitous and utilitarian industrially-produced woven material presented myriad possibilities. Taken by its physical nature and optical effects it produces when lit Kasten also used the material as a basis to create not only sculptures but also her ethereal cyanotypes in the 1970s another medium she has revisited intermittently over the last few decades.