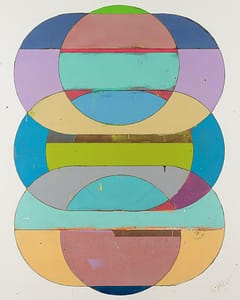 Born in Matanzas Cuba in 1974 he grew up surrounded by intense contrasts of colors pre-1959 American cars and the surging Communist government. His immersion in Cuba’s rhythms and sensuousness was short lived but nonetheless had a lasting impact on his young imagination.

Forced into Castro’s Army at age 16 Rey served for several months until he gambled on a chance for freedom. After weeks of preparation and with few provisions he set out for the United States in a rustic boat that he built himself from found or traded materials.

Alfonso landed in Miami but soon settled in San Francisco. Over the next decade he worked with sculptors and metal craftsmen attaining an exhaustive knowledge of metal design and fabrication while forging his identity as an artist. His talent and ideas were quickly recognized and several of his public works and sculptural signs can still be seen in cities throughout the West Coast. It was his work with aluminum on a large scale commission that first intrigued and later obsessed Alfonso as he developed his present style.